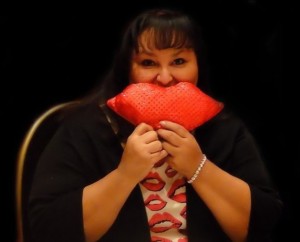 Simply put, Lupe is as colorful and diverse in personality as she is in her work. She has been at the forefront of the poker industry for many years, but always remains true to her roots in the non-profit sector.

Lupe Soto has a background as a professional therapist and social services administrator. However, she is best known for her involvement in the promotion of women in poker and poker entertainment.

She is the founder of many  “first’s” in the poker industry. In 2002, she opened Poker Chix, an online poker forum with an overwhelming positive response from women poker players. This led to the creation of the first women’s poker tour, Ladies International Poker Series – LIPS Tour. Over time, and with the introduction to many accomplished women who helped shape the poker industry, she realized the need to honor the women who paved the way before her. In 2008 she founded the prestigious Women in Poker Hall of Fame to showcase women who excel in the poker industry as a player or as an industry professional. The “WiPHoF” is embraced by the poker world and stands as one of the greatest honors in the industry.

Lupe is not only a poker industry professional, but she is an avid poker player as well. In 1996, she cut her teeth on the felt by watching her boyfriend play stud poker on date night. It wasn’t long before she was kicking him under the table and telling him how to play his cards. Some say it’s his fault she entered into the poker world when he told her to “go get your own table” and she did…. hasn’t looked back since.

Lupe Soto continues to grow the poker world with innovative poker programs. She started the first poker tour for seniors (players over 50 years of age) aptly named “Senior Poker Tour”. And as a tribute to all women poker players, she founded a global association – Women’s Poker Association, a 501c3 Non-Profit created to elevate and empower all women in poker.

If you were to ask Lupe to describe herself, she would say “I am round, brown, and low to the ground.… With a passion for people and poker.”